First up, Demon Records presents a narrated full-cast TV soundtrack of the legendary historical adventure, Doctor Who: The Massacre of Bartholomew's Eve. The Massacre is the lost fourth serial of the third season of Doctor Who, which starred William Hartnell as the First Doctor in BBC series Doctor Who. In this 4-part serial, first shown on BBC TV in February 1966, the TARDIS materialises in Paris in 1572, a time of great danger and religious strife. The Catholic Queen Mother, Catherine de Medici, is hatching a plot to kill all French Protestants, and the Doctor and Steven are quickly caught up in events. While Steven is befriended by a group of Protestants, the Doctor has a perfect double in the shape of the hated dignitary, the Abbot of Amboise. One of them is about to lose his life!

Presented across 2 x heavyweight 180g pieces of vinyl, in a striking 'Parisian Blaze' splatter, this narrated TV soundtrack evokes a classic Doctor Who adventure in all its aural magnificence. The vivid sounds of 16th Century Paris in turmoil, and the encroaching terror of the massacre, are all accompanied by the eerie sonics of composer's Ron Grainer & Delia Derbyshire's theme tune. Written by John Lucarotti, this dramatic story now survives only as a sound recording. Linking narration is provided by Peter Purves (Steven) and the cast includes Eric Thompson as Gaston, Andre Morell as Tavannes, Leonard Sachs as de Coligny and Annette Robinson as Anne. The coloured vinyl LPs are presented in a gatefold sleeve with illustrated inner bags and full episode billings, cast and credits. 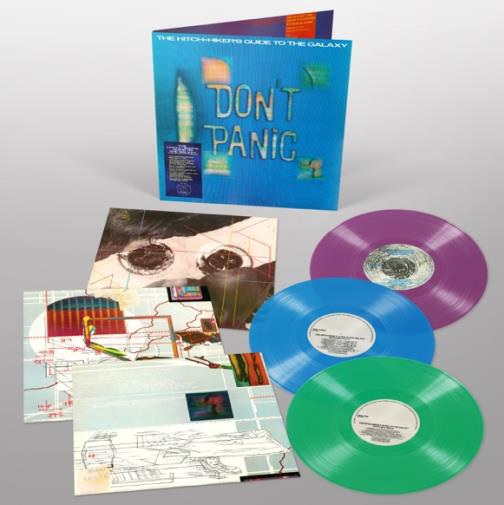 The Hitchhiker's Guide to the Galaxy - The Original Albums. Reissued for the first time in 40 years, two unique recordings of Douglas Adams's sci-fi comedy drama is the second release sci-fi audio collectors should look out for.

When Earthman Arthur Dent learns that first his house and then his planet are about to be bulldozed, it's the beginning of an interplanetary adventure for him and his friend, Ford Prefect. After fleeing Earth they hitch a lift with Zaphod Beeblebrox, who hurtles from one improbability to another - literally. With Trillian and Marvin the Paranoid Android in tow, the answer to Life, the Universe and Everything is soon revealed: 42. But what was the question...?

Following the success of the BBC radio series, Douglas Adams adapted his scripts for these two full-cast albums, with incidental radiophonic music provided by Paddy Kingsland. First released by Original Records in 1980, The Hitchhiker's Guide to the Galaxy and The Restaurant at the End of the Universe star Peter Jones as The Book, Simon Jones as Arthur Dent, Geoffrey McGivern as Ford Prefect and Mark Wing-Davey as Zaphod Beeblebrox.

Now, to celebrate 42 years since the very first radio series, these extraordinary recordings are returning to vinyl for Record Store Day 2020. They're presented on three heavyweight 180g coloured discs, in a very hoopy, double-sided gatefold sleeve, featuring facsimile reproduction of the original artwork.