Everything you think you know...is a lie according to The Master
By James Whittington, Wednesday 4th March 2020 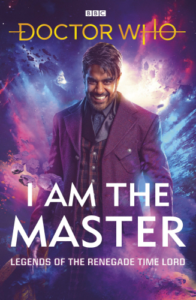 The Doctor and the Master's conflict of light and dark has spanned many times across the universe. This collection - of five short stories and a novella - explores the darkness in the Master's hearts; his secrets and sinister ambitions revealed through brand new adventures and encounters.

Join six adventures of undreamed evil: a quest to free alien warlords, a dangerous mission to save a vital ally, a meeting with Bram Stoker, a shattering of lives on a distant world, a trial of wits to gain untold power and drop in on the Master's latest incarnation during his 77 years of imprisonment on Earth.

The selection of authors showcases some of the finest writers working at the moment:

Matthew Sweet presents the BBC radio programmes Free Thinking, Sound of Cinema and The Philosopher's Arms. He has judged the Costa Book Award, edited The Woman in White for Penguin Classics and was Series Consultant on the Showtime/Sky Atlantic series Penny Dreadful. His books include The West End Front, Operation Chaos: The Vietnam Deserters Who Fought the CIA, the Brainwashers and Themselves.

Mike Tucker is a visual effects designer and author who has written several original Doctor Who novels as well as fiction for other shared universes. He has also co-written numerous factual books relating to film and television, including Impossible Worlds and the TARDIS Instruction Manual.

Jacqueline Rayner is the author of over 40 books and audio plays, including number one bestseller The Stone Rose, the highest-selling Doctor Who novel of all time, and two Doctor Who 'Quick Reads' for World Book Day. She lives in Essex with her husband and twin sons, and writes regularly for Doctor Who Magazine.

Mark Wright is a writer, producer and editor, and has written many audios, short stories and comic strips featuring new adventures for the Doctor, along with tie-ins to other series such as The Power Rangers and The Sarah Jane Adventures. He is a regular contributor to Doctor Who Magazine and co-wrote the Sunday Times bestseller Who-Ology.

Peter Anghelides has written award-winning and best-selling titles, with dozens of publications for BBC Books, BBC Audio, Virgin Publishing and Big Finish Productions. His original novels, audios and short stories include Doctor Who, Torchwood, Blake's 7 and The Sarah Jane Adventures.

Doctor Who: I Am the Master: Tales of the Renegade Time Lord is published on 9th July by BBC Books.