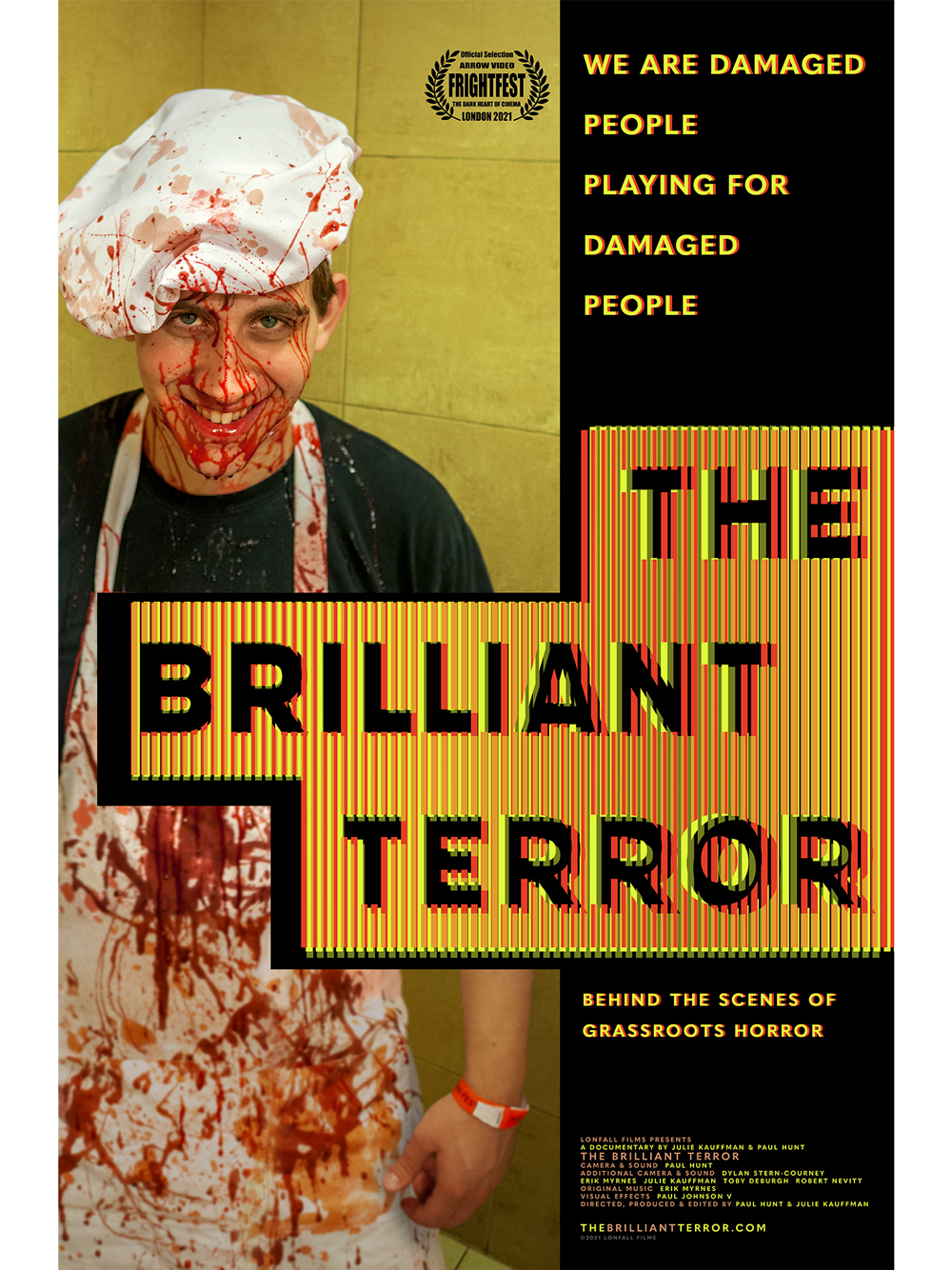 The filmmaking process is a long difficult one, but even harder for those working at grassroots level. Paul Hunt and Julie Kauffman's superb documentary, The Brilliant Terror is showing on the Horror Channel Screen today at Arrow Video FrightFest Online Edition today and it takes an in-depth look at this micro-budget genre and the people whose dedication has created some memorable movie moments. Here we chat to the directors about this acclaimed piece.

What inspired you to make The Brilliant Terror?

The original inspiration for the doc was based around an imagined scenario from Paul's childhood - a sort of Kobayashi Maru test of horror. We cut that piece from the movie a month before we finished editing. This brought the film into sharper focus, delving purely into the story of the filmmakers and fans - their motivations and methods and the community bond of grassroots creativity. One thread that survives from that initial premise is the theme of how we deal with our fears.

HC: What do you think is the major difference between "grassroots" and "Indie" filmmaking?

The grassroots filmmakers in our case are working on no-budget or microbudget filmmaking - it becomes all about your friends and the community you cultivate to help you fulfil your dream of making a movie. Grassroots has that DIY attitude and determination. Indie now seems to have become larger in scope, budget wise and control wise.

HC: There's been a number of docs recently covering filmmaking such as Clapboard Jungle, why do you think there's so much interest in horror filmmaking at the moment?

I don't think the interest in horror filmmaking has ever gone away. Nearly every DVD/Blu-ray extra includes a making of - from the studio EPK types to multi-part segments covering every layer. We all love to see what it takes to make a movie. It's hypnotic to witness the joys and pains the filmmakers go through or how they created a particular effect. I could endlessly watch the unedited sequence of Mike Lombardo and his crew shivering on the icy bathroom stall floor spitting blood and wrangling tentacles. But it's getting harder to see honest, warts-and-all behind-the-scenes moments these days because everyone wants to come off as perfect. So when those real gems squeak out, they're glorious.

HC: It focuses mainly on multi-talented creative Mike Lombardo and he's not shy in explaining the raw truth about the process, how did you first meet?

A month before we were about to wrap on our doc, we were checking the line up at a local film fest and discovered a zombie short made by Mike. We had been across the country interviewing people, but were still hoping to include local filmmakers from our central Pennsylvania area. So I called and left a message with Mike. The initial answer was no. But later he called back, agreed to an interview, and invited us to film behind the scenes on the set of his movies. And then he couldn't get rid of us. He was a charming triple threat - a great writer, director, and practical effects artist. The funny thing is we found our muse, Mike, just around the corner from us - literally 15 minutes away. And that took us on a 7-year journey that ultimately became the heart of this film.

HC: His enthusiasm is at first infectious, but seems to change much over the seven years you shot this, is this how it was?

You're always raring to go when you start filming a new project and all that prep seems to be paying off. But over time the giddy excitement turns into tiring hard work. Frustrations inevitably surface when your vision is not coming together like you want, especially when you're working with friends, many who are volunteering. Hence the reshoots and more reshoots. All great material for the documentary!

HC: Do you think qualifications are better than experience or vice versa when it comes to filmmaking?

For us as a two-person team, we followed the same path as Mike (not going to film school) and taught ourselves filmmaking. Twenty years ago we picked up a GL1 and filmed stories of artisans and their craft in India, and then a local puppeteer's production of Treasure Island. It was always about seeing the creative process. And we learned by doing and by watching many docs in many genres. We also both come from creative fields - graphic design and illustration - and filmmaking for us is just another way of expressing a compelling story.

HC: Were there any interviews you couldn't set up?

At one point, we were hoping to include a section on international grassroots horror and explore the traditions/monsters/folklore specific to people's homelands. We reached out to the Nigerian Nollywood horror community and had leads in Thailand and Japan, but nothing panned out there. So we dropped that thread, keeping only one filmmaker outside the U.S. in the doc - Ashley Thorpe. His animations explore British folklore inspired by his haunting Devonshire backdrop.

HC: I feel this will inspire many to try and create their own movies, is this your hope for the movie?

I'm not sure this is a good lesson in inspiring someone to make movies as Mike's experience is equal measures masochistic and joyous. We do hope it inspires a producer to reach out to Mike and invest in his talents.

HC: What's the single, greatest piece of advice you can give to budding filmmakers, actors, crew etc?

Watch and read everything you can on all flavours of filmmaking and storytelling, not just your personal taste. And watch the bad stuff too. We've learned so much more from documentaries that were just okay, because we end up trying to figure out why it didn't work, why it didn't take you on a journey.

Apart from running around the U.S. filming for nonprofits, we'd love to make a documentary about practical effects legend Rob Bottin - where did he go? Why did he walk away from it all. Anyone have a contact? Put Mike next to Mr. Bottin and see what happens. Or making a doc on Clint Howard, the man Mike hopes would play him in his biography.

HC: Paul Hunt and Julie Kauffman, thank you very much.