Kim Newman looks to the future and reports on Horror's up and coming Classic Sci-Fi Weekend
By Kim Newman, Monday 6th April 2020

The 1950s are remembered as the rock 'n' roll years - Bill Haley and Elvis, Little Richard and Chuck Berry - but also as the dawn of the atomic era, the height of the cold war, and the decade when science fiction movies reigned. A fad for futuristic design meant cars sported sharkfins like Flash Gordon's spaceship, and refrigerators were streamlined behemoths like the lumbering robots of pulp magazines. It was an uneasy, nervous decade - caught between optimism and terror, envisioning future homes full of gleaming labour-saving devices but also beasts from outer space or the dawn of time rampaging across the land, leaving radioactive debris in their wake. At the end of the classic The Thing From Another World (1951), humanity was told to 'watch the skies'... and so, dutifully, we did, though threats were as likely to come from beneath the sea, the bowels of the Earth, the house next door, or our own basement.

Every studio made science fiction films but seemed a bit embarrassed by such kid stuff. Mostly, it was down to B units at Universal-International or Columbia, or the enterprising likes of Roger Corman and Britain's Hammer Films. A few colour spectacles - Forbidden Planet, This Island Earth, The War of the Worlds - came along, but sci-fi was mostly in greyscale black and white, with lesser-known actors upstaged by monsters made by mad geniuses like Ray Harryhausen, and brisk, clipped (sometimes unintentionally hilarious) dialogue between staunch military men, glamour girls in lab coats and hard-pressed researchers who have crazy monster-fighting ideas that 'just might work'.

These films that filled the imaginations of kids who grew up to be Stephen King, Stephen Spielberg, Tim Burton, Joe Dante and George Lucas - who have channelled their themes and images into their own work, and ensured the style of 1950s sci-fi cinema is now that of the summer tentpole blockbuster. The resources a studio would once have given to Cecil B. DeMille to part the Red Sea or Mike Todd to go round the world in 80 days are now available to grown-up boys who were rapt by Earth vs the Flying Saucers, The Incredible Shrinking Man or - even - The Giant Claw. These apocalyptic visions are remounted in an orgy of CGI pixels as tentacled creatures menace the biggest stars on the planet. Yet the originals have something that can't be reproduced, reimagined or bettered. These are films held in enormous affection but offer much more than nostalgia for vanished drive-in double bills or teatime-after-school telly. There's still the chill. 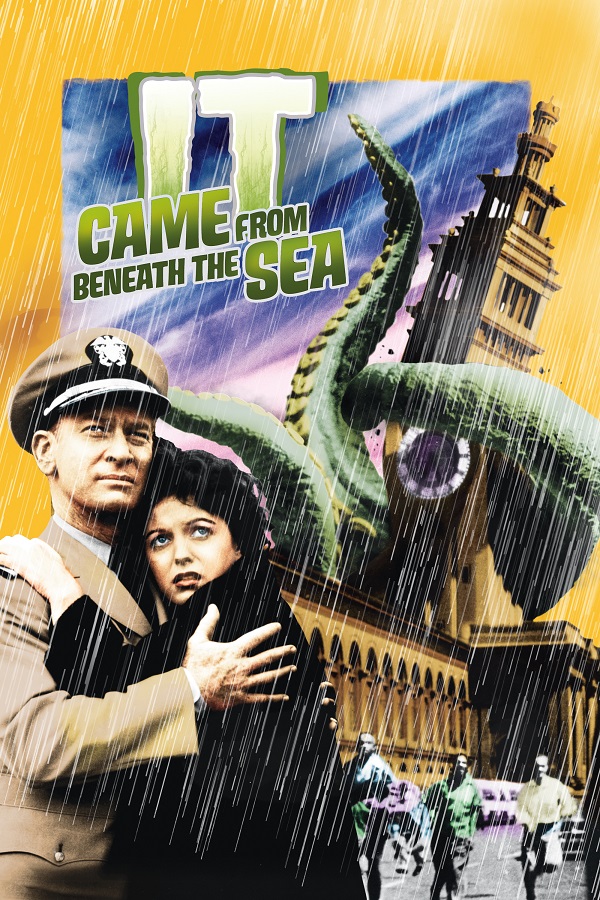 It Came from Beneath the Sea (1955) H-Bomb tests raise a giant octopus from the depths. It attacks ships... then heads for San Francisco to sweep Fisherman's Wharf with mighty tentacles and constrict the Golden Gate Bridge to pieces. This has gained a certain notoriety thanks to special effects genius Ray Harryhausen's admission that Columbia's tight budgeting meant that he had to cut back on tentacles - and so the monster is actually a six-limbed 'sexapus', though Harryhausen shoots its scenes so cannily that no one would ever have noticed if he didn't own up. The human plot is stiff and strange, with chauvinist submarine skipper Kenneth Tobey leching after pin-up marine biologist Faith Domergue and proving something of a wimp - he spends the finale unconscious on the seabed while someone else faces the beast. Its scenes of devastation-by-cephalopod are still impressive.

Earth vs the Flying Saucers (1956) Flying saucers, brilliantly animated by Ray Harryhausen, attack the Earth. Stubby, helmeted aliens sometimes emerge from their humming ships and zap people with death-rays, but the sleek, soulless saucers are the main attraction - crashing into Washington landmarks in the impressive, influential finale. Notionally based on a non-fiction bestseller, the film was among the first to dramatise key elements of UFO lore - 'foo lights', saucer flybys startling airline pilots, alien abduction and experiments on humans, 'missing time'. But the film is essentially glorious pulp, with eerie aliens, stalwart scientists, exciting battles and enjoyable blustering from a B stalwarts tossing off tongue-in-cheek dialogue ('when an armed and threatening power lands uninvited in our capital, we don't greet it with tea and cookies!'). 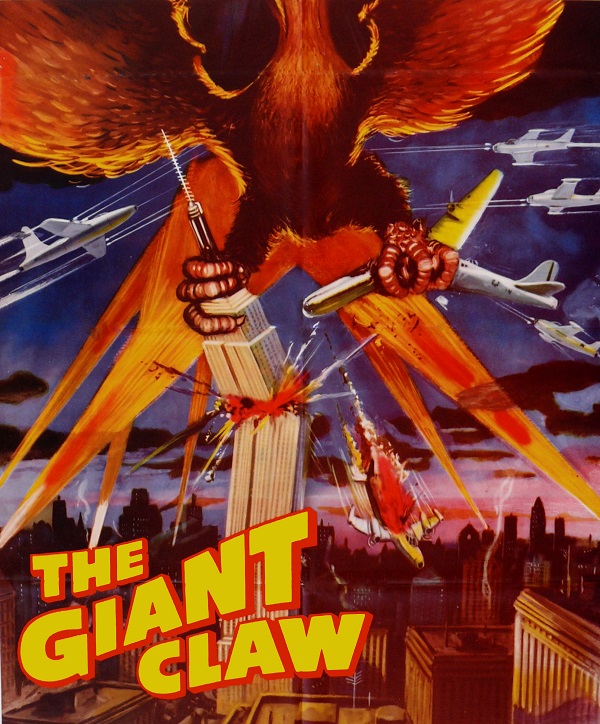 The Giant Claw (1957) Famously skinflint producer Sam Katzman finally got fed up with the painstaking, slow and (most of all) expensive artistry of Ray Harryhausen and looked around for a more affordable effects option - with results that were disastrous in the short term, but now make for a film more fondly regarded than many a slicker, duller effort. Directed by Fred F. Sears, of Earth vs the Flying Saucers, and pretty much following the template of earlier monster movies, this has a giant bird from outer space ravage the Earth. The shoestring effects monster looks like a demented muppet, with its beaky snarl and google eyes, and is all the more hilarious for being intercut with actors who presumably thought they were playing against a Harryhausen-quality beastie and do their best to express utter terror.

The Incredible Shrinking Man (1957) Based on a novel by Richard Matheson (I Am Legend, The Twilight Zone), directed by Jack Arnold (It Came from Outer Space, Creature from the Black Lagoon) and benefiting from a healthy effects budget, this is among the simplest, most memorable science fiction films. Regular Joe, Grant Williams is exposed to mysterious dust which makes him shrink - at first, this just complicates his domestic situation (significantly, his wedding ring falls off) as he becomes a child-sized man trapped in his own house, but as he gets smaller the challenges get bigger and he finds himself battling his own pet cat and a basement spider, which both view him as a tasty morsel. It's an appealing, absurd premise - strikingly visualised - but one of the first sci-fi films to get poetic and psychedelic in its mind-warp of an ending. 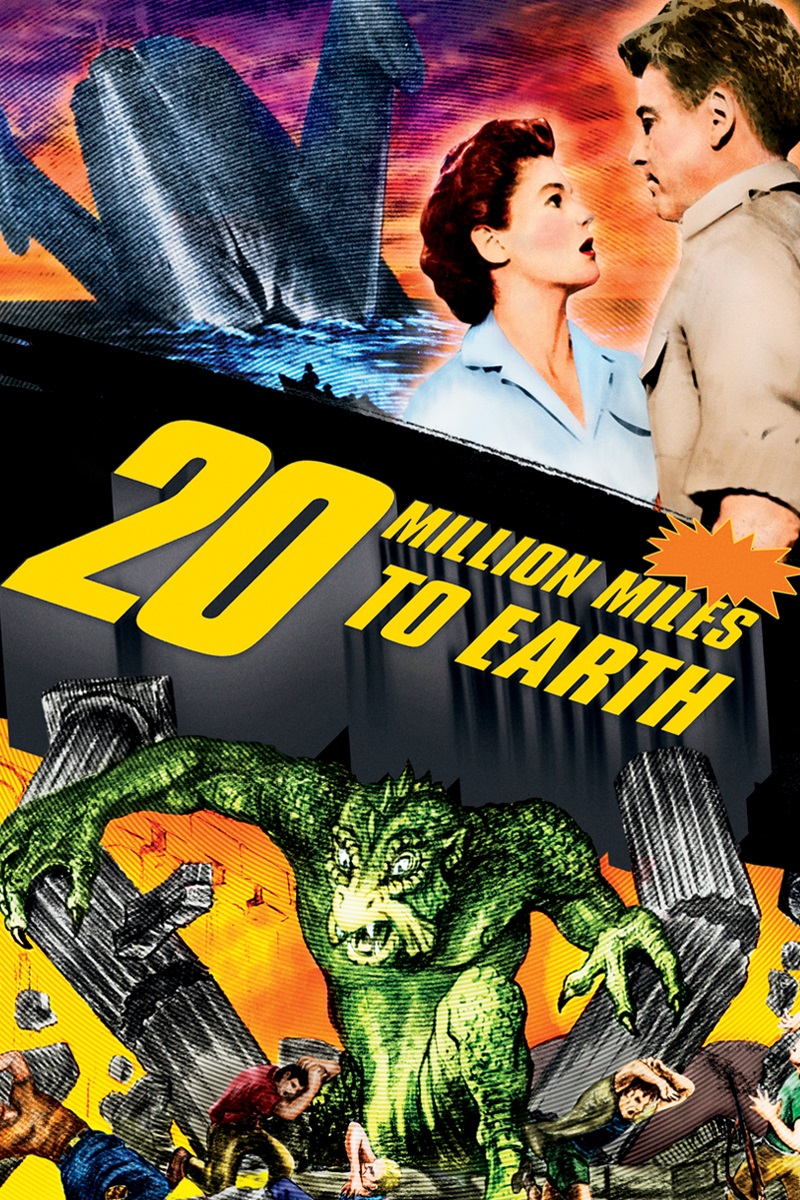 20 Million Miles to Earth (1957) Finally, it had dawned on Columbia that the star of their science fiction films was animator Ray Harryhausen - who was given a healthier budget, story input, an Italian location trip and more prominent billing for this creature feature. A spaceship crash-lands after a round trip to Venus, and an annoying Sicilian brat steals a gelatinous monster egg which he sells to a local zoologist so he can buy a cowboy hat. The egg hatches into one of Harryhausen's most inspired creations - a man-lizard who grows from tabletop size to colossus, and only causes devastation when attacked. Compared with the relatively brief appearances of the sexapus, the Venusian is onscreen a lot and is by far the film's most compelling character. The fact that, unlike King Kong, no human expresses admiration or sympathy for it makes this one of the chilliest, saddest monster rampages - we hope that kid enjoyed his cowboy hat after he was responsible for half Rome being flattened - but it's also undeniably spectacular, with the alien battling a pitchfork-wielding farmer, platoons of soldiers, and a brilliantly-animated elephant.


Related show tags: EARTH VS THE FLYING SAUCERS, THE GIANT CLAW, THE INCREDIBLE SHRINKING MAN, THE THING FROM ANOTHER WORLD, THIS ISLAND EARTH MORE FEATURES Horror Channel launches assault of premieres for June plus further seasons of Farscape
Posted on Thursday 12th May 2022