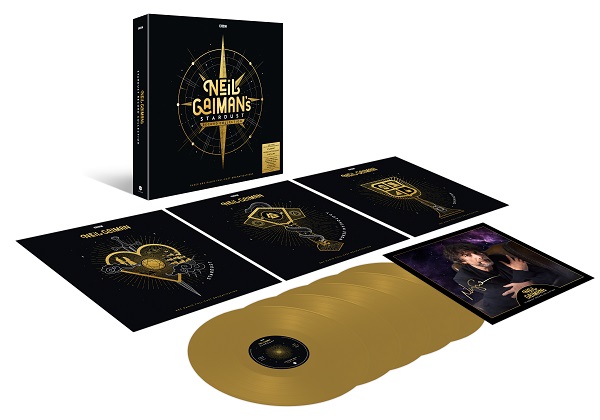 Demon Records presents the imaginative talents of writer Neil Gaiman on vinyl, Stardust, a collection of three full-cast radio dramas based on his bestselling works.

This highly collectable box set presents 5 x 140g gold vinyl, in three individual sleeves (two gatefolds plus one single LP). Each one features an exclusive sleeve note by Neil Gaiman plus full cast, credits and broadcast details and will be released on September 25th.

A frameable, full-colour print of Neil Gaiman, signed by the author himself, is also included. These are strictly limited to 500 copies in the UK.

Stardust, adapted by Dirk Maggs (Sandman, Good Omens) tells the story of Tristran who goes in search of a fallen star and enters the world of Faerie.

Norse Mythology is Gaiman's retelling of myths populated by gods and monsters, all featuring tricks and trust, fiery endings and new beginnings.

Chivalry tells the tale of Mrs Whitaker, who discovers the Holy Grail in a charity shop...