Thanks to Demon Records we can now experience The Underwater Menace
By James Whittington, Wednesday 15th April 2020 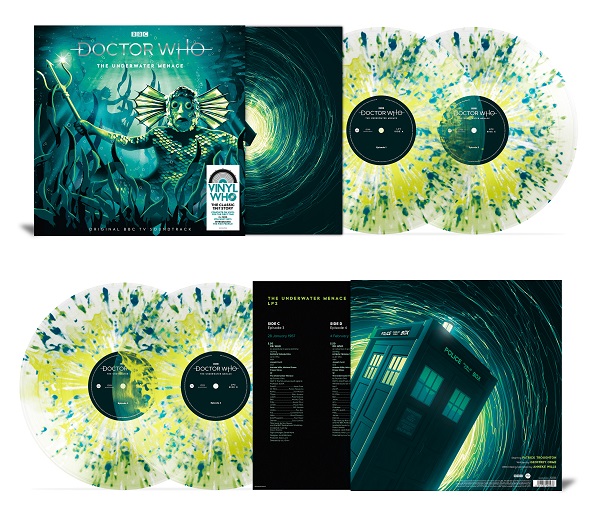 Demon Music Group presents The Underwater Menace, the fifth serial in the fourth season of Doctor Who, starring Patrick Troughton as the Doctor. The soundtrack will be released on 29th May on 2 x 140g 'Volcanic Eruption' vinyl.

In The Underwater Menace the TARDIS arrives on a volcanic island above the lost city of Atlantis. The Doctor learns of Professor Zaroff's insanely dangerous plan to raise the city of Atlantic from the depths of the sea once more. Whilst Ben and Jamie are put to work in the mines, and Polly is set to be transformed into one of the strange, enslaved Fish People, the Doctor must do everything he can to prevent Zaroff causing the end of the world.

This half missing serial only survives in full on audio, giving fans a unique opportunity to re-experience this lost part of Doctor Who's expansive history.

Presented across 2 x 140g vinyl discs, this 1967 TV soundtrack is narrated by Anneke Wills, who co-stars with Michael Craze and Frazer Hines as the Doctor's companions Polly, Ben and Jamie. Among the supporting cast are Joseph Furst, Colin Jeavons, Paul Anil and Noel Johnson (radio's Dick Barton). Incidental music is composed by Dudley Simpson, and the familiar strains of the Doctor Who theme are courtesy of the BBC Radiophonic Workshop.