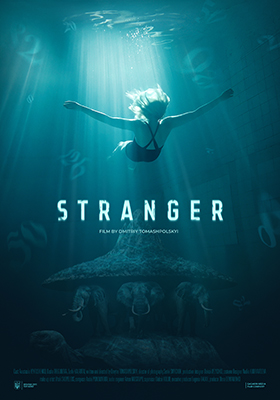 After the last night's double-bill of chills FrightFest settles down to deliver more movies that are designed to appeal to fans of the darker side of cinema. Here's what's on offer for the first half of tonight's programme!

The world premiere of Sacrifice gets the evening off to a solid start with Barbara Crampton delivering one of her strongest performances yet. When Isaac and his pregnant wife Emma return to the Norwegian village of his birth to deal with an unexpected inheritance they find themselves caught in a waking nightmare as an ancient frightening evil is awakened to claim the colour of madness in a birth right of its own. Think of The Wicker Man meets HP Lovecraft, this movie utilises the stunning natural scenery to bring an unearthly but natural darkness to a really twisted tale.

If you want to go further afield for your horror, then Dmitriy Tomapolskiy's Stranger is right up your street. Synchronized swimmers have disappeared during their performance at a water therapy clinic. How could they suddenly vanish into thin air? Five years later, Inspector Gluhovsky dives into an apparently similar case: the unexplained evaporation of a woman from a bath in a locked room built alongside a sewage purifying treatment facility. How are these cases connected and how does a doll with real hair relate to it? Filled with mystery and tension, this is a beautifully shot piece that shows how diverse the genre can be.

Retro thrills are also on offer but in an updated version, if you know what I mean with The Brain That Wouldn't Die. Riffing on the classic from 1962, this is a wild and wacky ride designed to pay homage to a classic whilst injecting some well-timed gags. This doom-laden fable is of a doctor who is experimenting with transplant techniques to keep his girlfriend's head alive when decapitated in a car crash. His hunt for a new body brings him to the edge of sanity...and beyond. Clever, inventive, and smart, this is a wonderful tribute to the original and instead of poking fun at it, it embraces its wild side and serves up a "cult movie in the making" treat.