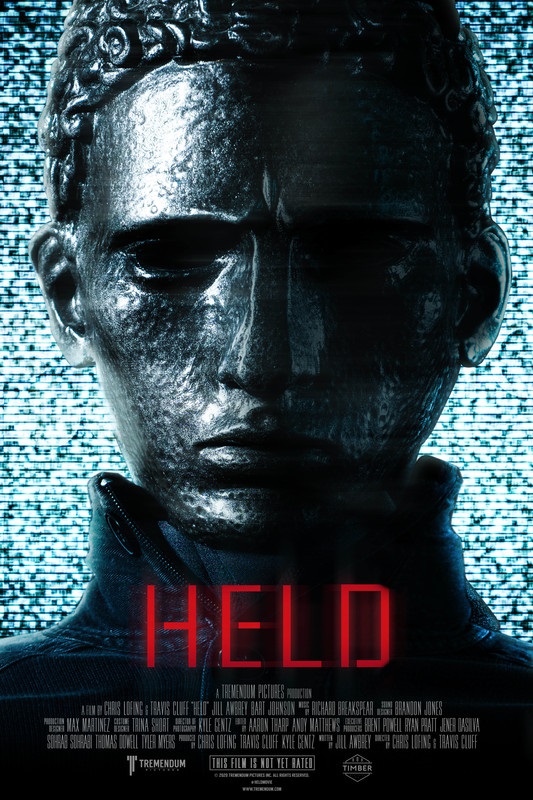 Just weeks after the first FrightFest Digital Edition we welcome another and what a packed programme Team FrightFest have lined up for us. More details on daily showings over the next few posts.

As usual the first day contains a couple of movies to get us all in the mood, a world premiere and a UK premiere. First up is Held which has been written by and stars Jill Awbrey as Emma whose marriage to Henry (Bart Johnson) has become slightly shaky. In an effort to reconnect on their 9-year anniversary, they vacation to a remote luxury rental, complete with automated smart house features and integrated security. After suspecting a night time intruder however, they decide to flee, only to become forcibly trapped inside by the all-encompassing technology. Then a Voice tells them their entire movements are being watched, revealing intimate knowledge about their relationship. As events get more brutal and dehumanizing, Emma and Henry must work together to uncover the truth and find a way out before it's too late. Filled with tension and holding a timely message this is a taught and well-constructed thriller.

The Sinners which follows is a devilish female led movie concerning seven A-list students from a religious town who get a lot more than they bargain for when they dabble in the occult. Calling themselves the Seven Deadly Sins, one of them confesses all their wrongdoings to the local pastor and the stakes get raised. Suddenly the fun games and sexy attic rituals cause one of them to end up dead. And the cat and mouse games begin. Who is killing them and how will they ever get their perfectly 'innocent' school lives back? Who can they really trust and who will help them find their way back to the light?

Over this edition of FrightFest, Horror Channel will be reporting form the virtual event with interviews and exclusive pieces via social media to bring us all be together.