Interview with Chad Ferrin, writer and director of The Deep Ones
By James Whittington, Friday 9th October 2020 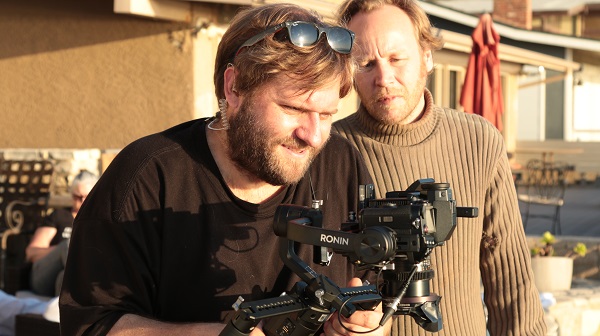 CF: My parents worked nights, so the television was my babysitter. I must have been around six years old when I saw an episode of Rod Serling's Night Gallery called "Pickman's Model". Seeing that monster carrying off Louise Sorel terrified me beyond belief and seared the name H.P. Lovecraft into my brain forever.

HC: Do you have a favourite story of his?

CF: I'd say "The Call of Cthulhu" sticks with me the most.

HC: How do you begin to try and bring to life his high concept stories?

CF: Well, it all started with Gina La Piana's beach house and my desire to do a cult film. Lovecraft sprang to mind the moment I saw the location. I re-read most of his works, ended up pulling mainly from Dagon, The Shadow Over Innsmouth and The Call of Cthulhu.

HC: Did you write it with a cast in mind?

CF: Yes, everyone was pretty much in mind for their roles, except Timothy Muskatell who was a last minute replacement for Bai Ling. He added a bizarre spice to it, sort of a cross between Bea Arthur and John Cleese.

HC: How did the cast prepare to be part of such an outlandish fantasy movie as they play their roles totally straight which adds so much to the experience?

CF: Our first day of shooting was on the boat where Johann Urb deep throats an emerging tentacle from Silvia's crotch. Everyone involved was so professional about it that it set the tone and performances of the whole shoot. When you have actors that embrace their characters and situations no matter how difficult, embarrassing or demeaning it lays a groundwork for all involved.

HC: The movie has been described as "Lovecraft and Ira Levin, by way of Corman and Charles Band" you must be happy with that?

HC: Who decided on the design of Dagon?

CF: Jim Ojala and I went back and forth on a few concepts drawing from C.H.U.D., Humanoids from the Deep and Lovecraft's illustration of Cthulhu. Jim and his crew did an amazing job bringing it all to life.

HC: Where did you shoot as it seems to be a quite exclusive location?

CF: Mostly at Solimar Beach in Ventura County, California. We shot in January, which was great because most of the neighbours were gone on holiday giving it a vacant feel.

HC: Would you like to do more Lovecraft inspired movies?

CF: Love to! I have a sequel to The Deep Ones kicking around in my head, so hopefully it'll fall into place.

CF: Finding distribution for The Deep Ones and doing a re-write to my script, Dances with Werewolves.