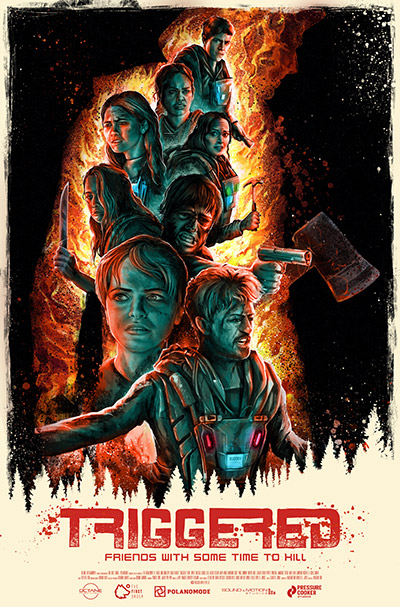 Although day 2 of FrightFest only had four movies in its line-up, all of them delivered what they promised in very different ways.

There's No Such Thing As Vampires from Logan Thomas gave blood-suckers a new lease of life, so to speak. Joshua and Ariel, literally crash into each other along a dark road in the dead of night... and before long find themselves pursued across North America, the target of an unstoppable supernatural force. Part road movie, part traditional vampire movie, it pushes itself along with a cool script that decides to keep the tone dark throughout. The John Carpenter inspired score adds a nostalgic touch to the movie which relies on characters rather than effects to get its chills.

Staying with traditional monsters, I Am Lisa is a stonking werewolf movie that has a serious undertone attached to its paranormal premise. A vicious and corrupt small-town sheriff and her deputies brutalise Lisa and leave her for dead in the nearby woods. There she is bitten by a werewolf and bestowed with supernatural abilities. Can Lisa retain her humanity as she exacts revenge and cedes herself more and more to the wolf side of her personality? With a superb central performance from Kristen Vaganos as Lisa, this film shows that you don't need to have a full transformation to make a werewolf movie effective, just damn good acting and a great script.

One of the most talked about movies of the festival comes from the multi-talented Brea Grant, 12 Hour Shift. In an Arkansas hospital, nurse Mandy (Angela Bettis) is in the organ trafficking business with her erratic cousin Regina (Chloe Farnworth) who is about to pick up a kidney from her and take it to the dealers. But the kidney gets misplaced, and Mandy must find another... Inspired, funny, dark and so inventive, this is what FrightFest is all about. Perfectly paced and as raw as the product they are stealing, with a musical moment that is just perfectly placed.

Triggered from Alastair Orr, director of Horror Channel favourite From A House on Willow Street is a straightforward shocker that has quite a body count for those who want hack n' slash action turned up to 11. Friends go camping in the woods but wake up with Suicide Vests strapped onto their chests. All have varying times on their countdown clocks. Initially they work together, find out how to disarm the bombs and look for help. The they discover they can 'take' one another's time by killing each other which changes everything. Playing like Battle Royal meets The Hunger Games this is a violent, gruesome and satisfying movie that aims directly at lovers of will delivered set-pieces this is an inventive and fun movie.